In the days when dragons roamed the earth turning people into toast, a mighty King lived in the magical castle of Camelot in the beautiful land of Avalon. Guided by the great wizard Merlin, this King became a legend and his name was Arthur.
The trouble with legends is that every time their stories are told they become more and more fabulous, so useless twits are often turned into superheros.
This is the true story of King Athur, who was not a superhero. He was a nasty little spoilt brat who was totally up himself.
Or was he...?

"With his sunglasses gone there was no denying the fact that he had no face.  All he had was a skull for a head."  Meet skulduggery pleasant: wise-cracking detective , powerful magician sworn enemy of evil.  Oh yes.  And dead. This book is about how Stephanie Edgely gets apprenticed to Skulduggery and goes on to try and find the sceptre of the ancients before the evil socerer Serpine finds it and uses it's powers to destroy the world.
I've really enjoyed reading this book and I hope you like it as well.

Never boring, always heaps of action.  I would recommend it for older readers. 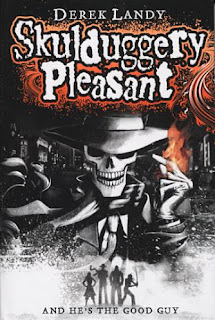 The Rangers Apprentice/The Ruins of Gorlan

Will has always wanted to be a knight like the father that he never knew, so he is devastated when he gets rejected from battle school.  Instead he gets apprenticed to the mysterious ranger Halt who has the uncanny ability to move unseen.  Will starts to learn how to use a rangers weapons, a bow and arrow, a stubborn little pony and a mottled cloak.  When Will and Halt set out on an adventure to prevent the assassination of the king Will learns that a rangers weapons aren't so useless after all...

It  hooked me from the start and I just couldn't put it down it was so good.
By Joshua

Young criminal mastermind Otto Malpense has been chosen to attend H.I.V.E , the Higher Institute of Villainous Education.
But there's one catch, he can't leave until his study's are complete.
There's no way he's staying to learn about something he has such a natural talent for , so Otto and his best friend Wing Fanchu attempt to escape...


If you've tried Artemis Fowl and enjoyed it you'll love it.
By Joshua 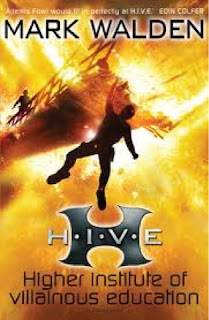 The Call Of The Wild

Hi I'm Courtney and I'm here to tell you about this book I read. If you like animal books you will love this book. It's about this dog named Buck. He has always been a quiet dog until one day he gets kidnapped! Can Buck find a way to survive out in the wild?...
I liked this  book and I think you will like it too.
Posted by Unknown at 21:55 2 comments:

Hi I'm Jed. I'm a member of the Ranzaureaders book club. I'm going to tell you some rcomended book series for year 5 and 6 boys. Here are the  book series: the Hunger Games, Percy Jackson, and Artemis Fowl.  This is the Hunger Games Blurb and front cover.

North America has been destroyed and is now run by the powerful Capital and is divided into 12 districts (district 13 has been destroyed due to a rebellion). In district 12 ace hunter Katniss Everdeen, a 16 year old girl, carves out a meager existence for herself, her younger sister Prim and their widowed mother. In order to keep the 12 districts aware of who runs the county, the Capital arranges a game to the death each year in an elaborate arena. Each district holds a drawing of one boy and one girl to go as tributes. When her sister is picked, Katniss exercises her option to volunteer for the games. Along with Katniss comes also Peeta, the baker’s son, who grew up with her.
Katniss and Peeta must fend for themselves against natural elements, the Gamemakers and the other contestants whose only option is to kill or be killed.

Trouble-prone Percy Jackson is having problems in high school - but that's the least of his challenges. It's the 21st century, but the gods of Mount Olympus seem to have walked out of the pages of Percy's Greek mythology texts and into his life.Percy has found out that one of the gods is his dad which means Percy is a demigod - half human, half god. At the same time, the powerful gods on Olympus are feuding, which could launch a war enveloping our entire planet. Twelve-year-old genius Artemis Fowl decides to reinvigorate his family fortunes by kidnapping a fairy and demanding its gold. Having obtained and decoded the Book, a tome containing all of the fairies secrets, Artemis captures an elf named Holly Short and holds her captive at his family mansion in Ireland. However, he hasn't reckoned on the resources and cunning of the LEPrecon Unit, an elite branch of the fairy police force, whose members will stop at nothing to rescue Captain Short. It seems that the wicked ways of the Mud People (humans) have driven most of the magical creatures underground, where a gritty, urban fairy civilization is flourishing. The fairy characters are mouthy and eccentric, but Artemis is too stiff and enigmatic to be interesting; the story bogs down when the focus is on him.

I really hope that you now want to read these books.
Posted by Unknown at 22:07 2 comments:

Sitting On The Fence

Hi, I'm Courtney and I am one of the Ranzau book team. The book I read is all about the Springboks tour in 1981. Its a diary of Martin Daly and his life back then.  His rugby mad dad was fighting with his sister who wanted to stop the tour from happening.
Martin just wishes that the whole thing would just go away.
"Your a fence sitter like a dumb bunny" his sister told him. But when he joins a new school he makes new friends...
I hope you enjoy this good book.
Posted by Unknown at 00:43 1 comment:

Hello, my name is Megyn, and I'm part of the ranzau book team. I really recommend the book: BLUBBER, for older readers. Its about a girl named: Jill. Blubber is a good name for her, the note from Caroline said about Linda. Jill crumpled it up, and left it in the corner of her school desk. She didn't want to think about Linda or her dumb report on the whale. She only wanted to think about Halloween. But Robby grabbed the note and before Linda had stopped talking, it had gone halfway around the room. . . Hope you enjoy it.
Posted by Unknown at 17:01 1 comment:

Email ThisBlogThis!Share to TwitterShare to FacebookShare to Pinterest
Home

Where everyone can shine